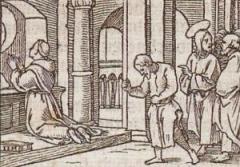 During worship at Little Falls Meeting, I rose and said,

I hope you’ll forgive me if this is too bold. Using a story told by Jesus, I’m about to make a riddle that’s no joke. Here’s the story.

Two guys walk into a house of worship, one after the other. The first, a man whose job makes him complicit in state oppression, stops just by the door. He hangs his head, beats his breast, and sincerely acknowledges before God that he is a wicked person and very much in need of mercy. The second guy walks in, looks the first fellow over, and then continues to the front. There, he expresses his sincere gratitude to God that he has been blessed with right religion: what good people should do, he does; what good people should not do, he does not. He’s thankful that he’s not like the guy in the back.

My riddle is not about which one Jesus approves. As you already know if you’ve read the story in the Bible, Jesus says that God accepts the guy in the back and rejects the other one. My riddle is this: which one is the Quaker?

After worship, a Friend said to me: “My answer is: neither.” As I thought about that, I realized that I had been thinking of the question as being of the “either-or” sort: do we Quakers tend to be more like the first man – the publican, as Jesus told it – or the second – the Pharisee? But the story has three important characters, not two: I, at least, had excluded the narrator.

When Jesus is included, the story deepens. It speaks to me now of a complex, but perhaps not uncommon, Quaker conversion process. Let’s say that a person begins as something like a publican. As the Light of agapē-love shines on her life, she becomes aware that she is complicit in an oppressive and violent social, economic, and political system. Thus “convicted” by the Light, she repents and becomes a Quaker, publicly affirming Friends’ religious ideals of peace, equality, and integrity. Now she can feel that she is no longer complicit; her Quaker values and practices lift her above the warmongers and other less enlightened, less virtuous, people.

As we’ve seen, Jesus would have preferred that she remain at the honest publican’s level. But she has found a way to save herself. She has become what I’ll call a Quarisee — a Quaker-Pharisee.

In the Christian scriptures, “Pharisee” refers to a member of a religious group. The Pharisee publicly lives a spiritual life. He is committed to discerning and doing the right thing; he tries hard to know and follow the will of God, and he encourages others to do likewise. And he is, if more or less subconsciously, proud of himself for being a decent person. He doesn’t see that he continues to serve an unjust and violent system. As a member of organized religion, even if one that protests against unrighteousness, he helps maintain the status quo. Protected by state power, profiting from an unjust economy, he lives well while the poor starve. Meanwhile, he looks down on those whose values, he feels, are not as noble as his, or whose actions offend his (ultimately self-serving) sense of what’s right.

That is what our protagonist has become. After the good start of responding to the Light’s illumination of her situation, she has fallen into the insidious sin of self-satisfaction. If, as our tradition teaches, the first function of the Light is to convict us of the moral failure of selfishness, to reveal us to ourselves as we really are in relation to justice, peace, and mercy, then when we no longer see that selfishness — regardless of what we tell ourselves, regardless of what our Quaker community might affirm for us — we have turned away from the Light. And that, although she does not realize it, is what she has done, almost from the outset. She sees now, not herself, but what she believes herself to be.

If our new Friend abides at the Quarisee stage, which is the natural thing to do, then she gives her life over to hypocrisy. But there is, as the Little Falls Friend reminded me, another possibility, one which opens for us when we remember to include Jesus the Christ in our story. For, as we learn from the first Friends, the vocation of a Quaker is to be, like Jesus, the body of Christ in this world.

In the Bible story, it is Jesus, the Light enfleshed, who, free of the sin of both publican and Pharisee, can examine their situations from a critical yet compassionate perspective. Seeing the complicity of the hapless publican and the hypocrisy of the satisfied Pharisee, he pronounces judgment: God accepts the authenticity of the sinner who knows what he is, for such a person at least acknowledges what the Light reveals. But God rejects the complacency of the self-consciously spiritual person, because it is a result — and this would be especially ironic for a Quaker — of his failure to appraise himself and his life honestly and continuously in the Light.

This says to our Quarisee that if she can open her present condition to the Light’s critical searching, accept the continuing revelation that evil lives disguised as goodness in her heart, and allow the Light to lead her back into repentance, she can begin again. This time, however, alert to the allure of self-righteousness, she may learn from the example of Jesus that it’s not about her and her moral status but about the plight of the world and the individual beings in the world. This time, she may be able to go out of herself and enter into real relationship with others, responding not to her own beliefs and values but to the others’ suffering and need. This time, she may give up the project of making herself good and accept the call to be the body of Christ, broken for love of the world.

NOTES for The Publican, the Quarisee, and Christ:

6 thoughts on “The Publican, the Quarisee, and Christ”

Submission of comments is welcome. All submissions are reviewed. Comments that are thoughtful, on-topic, dialogical, respectful, and clearly written are likely to be published.